The city of Istanbul, once Constantinople, purportedly hosts the tombs of many Sahaba, the revered Companions of the Prophet Muhammad. 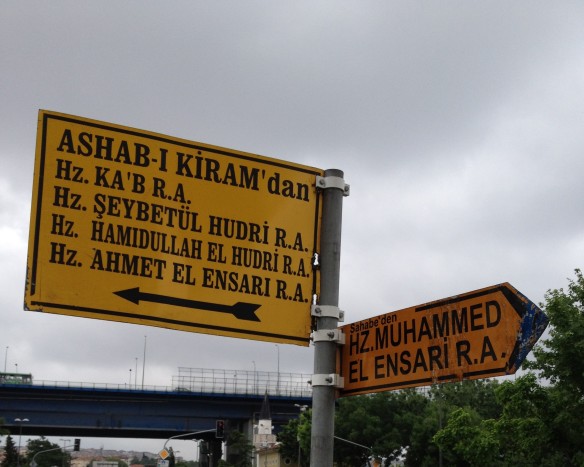 Though the city did not fall until 1453, when it was conquered by the Ottoman Sultan Mehmet II (d. 886/1481), Muslims forces campaigned against the city during the earliest decades of Islam’s irruption onto the world stage. The fifth Caliph Mu’āwiya (d. 60/680) directed a major campaign against Constantinople in the year 49/669, less than forty years after the Prophet’s death. In these earliest of days, it was often at the very walls of the city itself that some Companions of the Prophet reportedly breathed their last breath.

The present post is the first of a series that will document the lives and alleged burial sites of many of these Sahaba.* By some counts, more than thirty such tombs are spread across the city. During our last visit to the city in May of 2012 we visited many- but far from all- of these in order to properly locate and photo-document them. It is hoped that this series will facilitate the future visits of other travelers and to shed further light on Istanbul’s importance for the tradition. 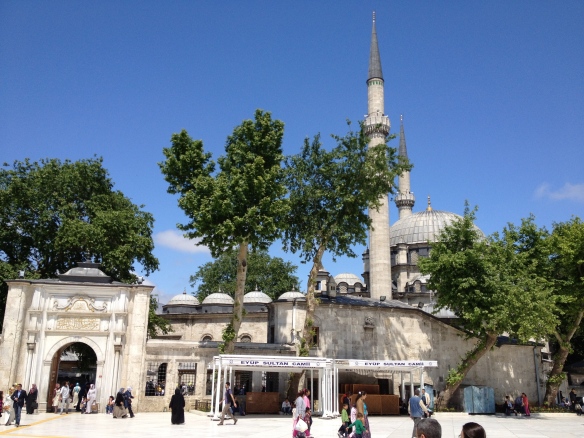 Just beyond the city walls and alongside the Golden Horn is the district of Eyüp, named after the tomb and mosque complex built around the burial site of Abū Ayyūb al-Anṣārī (d. 52/672). Our guide to the city John Freely reports:

The mosque of Eyüp is the holiest in Istanbul; indeed after Mecca and Jerusalem it is perhaps the most sacred place of pilgrimage in the Islamic world. This is because it is the reputed burial place of Eyüp (Job) Ensari, the friend and standard-bearer of the Prophet Muhammed. Long after the Prophet’s death, Eyüp is said to have been one of the leaders of the first Arab siege of Constantinople from 674 to 678 and to have been killed and buried somewhere outside the walls. When some eight centuries later Fatih Mehmet besieged the city, he and his advisors, as Evliya Çelebi writes,

“spent seven whole days searching for the tomb. At last Akşemsettin (the Şeyh-ül Islam) exclaimed, ‘Good news, my Prince, of Eyüp’s tomb!’ Thus saying he began to pray and then fell asleep. Some interpreted this sleep as a veil cast by shame over his ignorance of the tomb; but after some time he raised his head, his eyes became bloodshot, the sweat ran from his forehead, and he said to the Sultan, ‘Eyüp’s tomb is on the very spot where I spread the carpet for prayer.’ Upon this, three of his attendants together with the Şeyh and the Sultan began to dig up the ground, when at a depth of three yards they found a square stone of verd antique on which was written in Cufic letters: ‘This is the tomb of Eba Eyüp.’ They lifted the stone and found below it the body of Eyüp wrapped up in a saffron-coloured shroud, with a brazen play-ball in his hand, fresh and well-preserved. They replaced the stone, formed a little mound of the earth they had dug up, and laid the foundations of the mausoleum amidst the prayers of the whole army.”

This pleasant story, though still current and recounted in one form or another by the guides and guidebooks, seems rather unlikely – apart from its supernatural elements – because it appears that the tomb had always been known and respected even by the Byzantines. Various Arab historians note that it was made a condition of peace, after the first Arab siege, that the tomb should be preserved. An Arab traveller during the reign of Manuel I Comnenus (r. 1143-80) mentions it as still existing in his day, while another traveller, Zakariya al-Kazwini (ca. 1203-83), relates that “this tomb is now venerated among them (the Byzantines) and they open it when they pray for rain in times of drought; and rain is granted them.” If the tomb was still extant in early Palaeologan times [dynasty begins 1259], it seems improbable that it should so completely have disappeared before the Turkish conquest. Probably, Fatih restored or rebuilt it on a grander scale. (Sumner-Boyd and Freely, Strolling Through Istanbul, 363-4)

It was reported that the Greeks frequent his grave, renovate it, and pray there for rain in times of drought. (al-Ṭabarī, The History of al-Ṭabarī, 39:40)

Tradition asserts that in the course of the siege abu-Ayyūb  died of dysentery and was buried before the walls of Constantinople. His legendary tomb soon became a shrine even for the Christian Greeks, who made pilgrimages to it in times of drought to pray for rain. During the siege of Constantinople in 1453 by the Turks, the tomb was miraculously discovered by rays of light… and a mosque was built on the site. Thus did the Madīnese gentleman become a saint for three nations. (Hitti, History of the Arabs, 201-2) 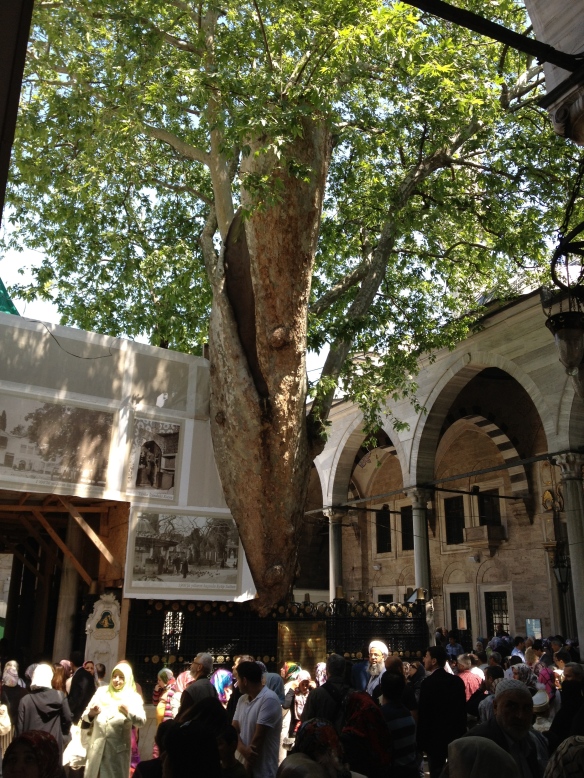 The Courtyard of Eyüp Sultan Camii. The tomb of Abū Ayyūb al-Anṣārī lies in an alcove just behind the tree.

Returning to the immense historical chronicle by al-Ṭabarī we find the following about Abū Ayyūb listed among “The Events of the Year 49 (February 9, 669-January 28, 670)”:

Among them was Abū Ayyūb. His name was Khālid b. Zayd b. Kulayb b. Tha’labah b. ‘Abd b. ‘Awf b. Ghanm b. Mālik b. al-Najjār. All [the biographers] are unanimous that he was one of the seventy Anṣār who swore allegiance to the Prophet on the night of the ‘Aqabah meeting. The Prophet established the bound of brotherhood (mu’ākhāh) between Abū Ayyūb and Muṣ’ab b. ‘Umayr. Abū Ayyūb participated in [the battles of] Badr, Uḥud, and the Ditch and all the [other] events on the Prophet’s side.

Abū Ayyūb died when Yazid b. Mu’āwiyah raided Constantinople during the caliphate of his father, Mu’āwiyah. His grave is at the foot of the fortress in Constantinople, in the Byzantine territory. (al-Ṭabarī, History, 39:40)

As al-Ṭabarī has related, Abū Ayyūb was among the first Muslims of Medina. In fact, as Ibn Isḥāq and al-Balãdhūrī report, the Prophet took up residence with Abū Ayyūb when he first arrived in the city and stayed there until the mosque’s construction was completed (Ibn Isḥāq, The Life of Muhammad, 228-30; al-Balãdhūrī, The Origins of the Islamic State, 19).

More on the life of Abū Ayyūb al-Anṣārī can be found in a modern pietistic compilation by AbdulWāhid Hāmid. We will conclude this post with an excerpt from the end of his account given his appropriately memorializing tone of Abū Ayyūb:

The last campaign he took part in was the one prepared by Mu’āwiyah and led by his son Yazīd against Constantinople. Abū Ayyūb at that time was a very old man, almost eighty years old. But that did not prevent him from joining the army and crossing the seas as a ghāzī in the path of God. After only a short time engaged in battled, Abū Ayyūb fell ill and had to withdraw from fighting. Yazīd came to him and asked: “Do you need anything, Abū Ayyūb?”

“Convey my salāms to the Muslim armies and say to them: ‘Abū Ayyūb urges you to penetrate deeply into the territory of the enemy as far as you can go, that you should carry him with you and that you should bury him under your feet at the walls of Constantinople.'” Then he breathed his last.

The Muslim army fulfilled the desire of the companion of the Messenger of God. They pushed back the enemy’s forces in attack after attack until they reached the walls of Constantinople. There they buried him. (Hāmid, Companions of the Prophet, 1:157-8) 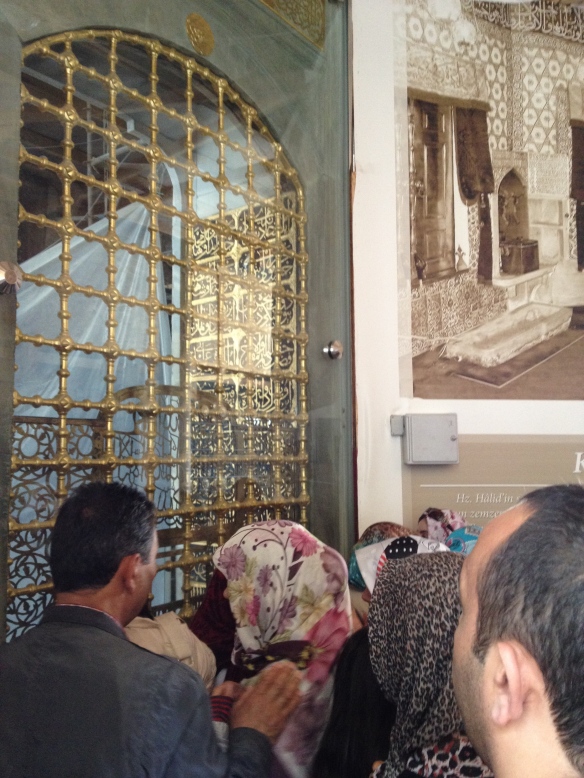 Visitors and pilgrims gathered before the tomb of Abū Ayyūb al-Anṣārī.

*I say “alleged” simply because the history of such sites are more rich and complicated than they initially appear. Several of these sites, for example, were in fact places of veneration for the city’s Christians as well, well before the arrival of the Ottomans. Rather than wrestling with questions of historicity, the posts of this series will focus more on what the available narratives and sources have to report about the Companions supposedly buried in Istanbul. And to encourage more curious readers, I refer to English-language sources or English translations of primary sources wherever possible, though this may not always be maintained throughout the series. Finally, I try to provide dates both in the ḥijrī (Islamic calendar, AH) and Common Era (CE).

al-Ṭabarī, Muḥammad b. Jarīr. The History of al-Ṭabarī, Volume XXXIX: Biographies of the Prophet’s Companions and Their Successors. Translated by Ella Landau-Tasseron. Albany: State University of New York Press, 1998.

The Sahaba of Istanbul [2] The Underground Mosque

The Sahaba of Istanbul [3] Eyup

The Sahaba of Istanbul [5] Ayvansaray Coast

The Sahaba of Istanbul [6] Galata/Eminonu/Sultanahmet (forthcoming)