The city walls of Istanbul stretch from the Marmara Sea in the south to the Haliç or Golden Horn in the north. It is at the foot of these walls that a large number of Companions are reportedly buried. In this fourth post we visit four graves collected together just outside of the section of the wall that is located by the waters of the Golden Horn in a shrine complex lying between the neighborhoods of Eyüp and Ayvansaray. The tombs therein are those of Abū Shayba al-Khudrī (Ebu Şeybet ül-Hudri), Abū Aḥmad al-Anṣārī (Ebu Ahmed el-Ensari), Ḥamīd Allāh al-Anṣārī (Hamidullah el-Ensari), and Ka’b (Kab). It is a brief 15-20 minute walk down from Eyüp or a single stop on the ferry, which runs up and down the Golden Horn.

Two of these Companions and the previously discussed Abū Ayyub al-Anṣārī are mentioned by Roger Crowley in his account of the Ottoman conquest of Constantinople:

The [Ottoman] men were reminded that they were following in the footsteps of the companions of the Prophet killed at the first Arab siege of Constantinople. Their names were passed from mouth to mouth: Hazret Hafiz, Ebu Seybet ul-Ensari, Hamd ul-Ensari, and above all Ayyub, whom the Turks called Eyüp. The holy men reminded their listeners, in hushed tones, that to them fell the honor of fulfilling the words of the Prophet himself:

The Prophet said to his disciples: “Have you heard of a city with land on one side and sea on the other two sides?” They replied: “Yes, O Messenger of God.” He spoke: “The last hour [of Judgement] will not dawn before it is taken by 70,000 sons of Isaac. When they reach it, they will not do battle with arms and catapults but with the words ‘There is no God but Allah, and Allah is great.’ Then the first sea wall will collapse, and the second time the second sea wall, and the third time the wall on the land side will collapse, and, rejoicing, they will enter in.” (Crowley, 1453, 194)

The shrine complex that presently hosts our four graves is in fact situated between two sets of walls, each respectively named after the Byzantine potentate who oversaw their construction, Heraclius (d. 641 CE) and Leo V (d. 820 CE). John Freely describes the area as follows:

The citadel between the walls of Leo and Heraclius is in its own peculiar way quite fascinating. At one end of the citadel there is a small Muslim graveyard which contains the graves of Ebu Şeybet ül-Hudri and Hamd ül-Ensari, two martyred Companions of the Prophet. (Sumner-Boyd and Freely, Strolling through Istanbul, 358)

The city walls by the Golden Horn between Eyüp and Ayvansaray

Upon entering the gardened complex there is a separate stone building off to the right that shelters the grave of Ka’b. One can enter to see the tomb housed between an edifice of wood and glass. The tomb of Ka’b appears to have once been located inside Yavedud Camii, a nearby mosque, but was moved at some point to its present location in the shrine complex. As for the Ka’b resting therein, it is entirely unclear which Ka’b is intended.

The earliest possibility is Ka’b b. ‘Umayr al-Ghifārī (d. 8/629) who died before the Prophet Muhammad. It is reported of him:

Alternatively, Ka’b al-Aḥbār b. Māti’ (d. ca. 32/652-3) was a Jewish convert to Islam to whom a great deal of Isrā’īliyyāt is attributed. Little in his life indicates that he ventured into Byzantine territory and the debates over the date of his death and his burial site all indicate places other than Constantinople like Homs, Damascus, Giza, and Medina. (al-Ṭabarī, History, 39:206-7; Ibn Saʿd, Kitāb al-Ṭabaqāt al-kabīr, 9:449; Schmitz, EI2)

The grave of Ka’b

The last two significant Companions known by the name Ka’b were both poets. Ka’b b. Mālik (d. 50/670 or 53/673) was one of the members of the tribe of al-Khazraj present at the second meeting of ‘Aqaba and later became known as one of the poets of the Prophet. His place of death is unknown, though like the two preceding personalities he too died before the first Arab siege of Constantinople. Ka’b b. Zuhayr was a Meccan antagonist known for his disparaging poetry against the Prophet who eventually converted and continued to compose poems but now in support and praise of the Muslims. While his date of death is uncertain, Basset vaguely reports that “he appears to have lived to a ripe old age.” (Basset, EI2)

At the opposite end of the shrine complex is another building set in front of a small cemetery. The building itself houses two tombs, the first of which belongs to Abū Shayba al-Khudrī. Brief mention is made of him in Ibn Ṣalāḥ al-Shahrazūrī’s (d. 643/1245) treatise on hadith Kitāb Maʿrifat al-anwāʾ ʿilm al-ḥadīth in the chapter on paidonymics:

Those who are known by their paidonymic [kunyā] and their names are not known and it is not known whether this appellation is their paidonymic or something else… Other examples from the Companions are… Abū Shayba al-Khuḍrī, who died in the siege of Constantinople and was buried there. (Ibn Ṣalāḥ al-Shahrazūrī, An Introduction to the Science of Ḥadīth, 250)

It appears then that Abū Shayba al-Khudrī was indeed amongst the Companions that came to and died before the city walls of Constantinople. 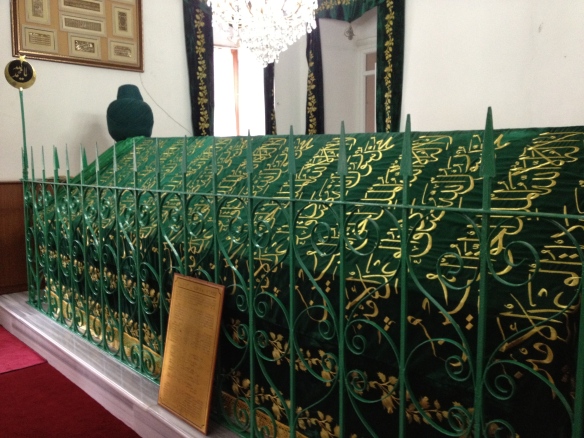 The tomb of Abu Shayba al-Khudri

The grave of Abu Ahmad al-Ansari

Across from the tomb of Abu Shayba al-Khuḍrī and laying out in the open air is the grave of Abū Aḥmad al-Anṣārī. The grave is easily recognized given the great tree that grows forth from his resting place and the well marked sign hanging above. Unfortunately, I was unable to obtain any biographical information for Abū Aḥmad. Any assistance would be appreciated.

Just around the corner and in the same building containing the tomb of Abu Shayba al-Khuḍrī is another room with the tomb of Ḥamīd Allāh al-Anṣārī (the provided Turkish appellation of Hamidullah el-Ensari is somewhat ambiguous in terms of determining its Arabic equivalent). It is possible that the person meant is Ḥumayd b. Nāfiʿ. Ibn Saʿd (d. 230) mentions that he was a client (mawlā) of Abū Ayyūb al-Anṣārī adding, “He transmitted on the authority of Abū Ayyūb and went on Ḥajj with him” (Ibn Saʿd, Kitāb al-Ṭabaqāt al-kabīr, 7:300). Ḥumayd’s place of death, however, is not given. 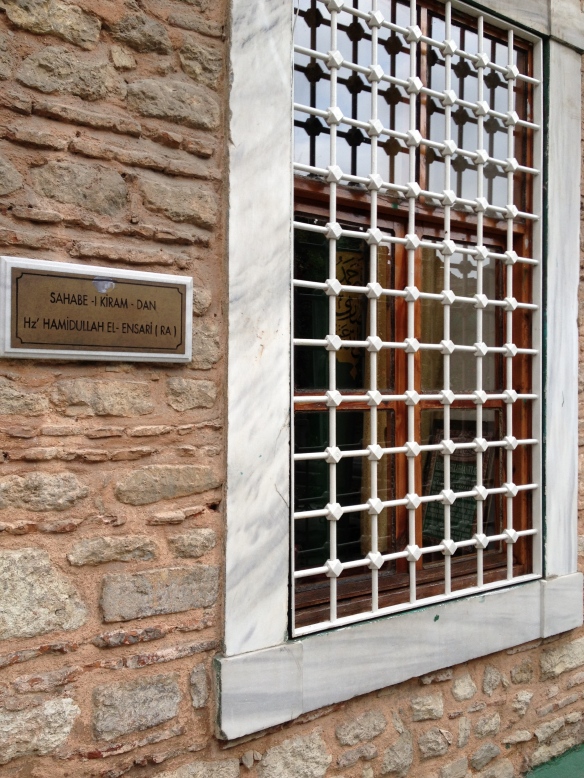 The tomb of Hamid Allah al-Ansari

Crowley, Roger. 2005. 1453: The Holy War for Constantinople and the Clash of Islam and the West. New York: Hyperion.

The Sahaba of Istanbul [2] The Underground Mosque

The Sahaba of Istanbul [3] Eyup

The Sahaba of Istanbul [5] The Ayvansaray Coast

The Sahaba of Istanbul [6] Galata/Eminonu/Sultanahmet (forthcoming)